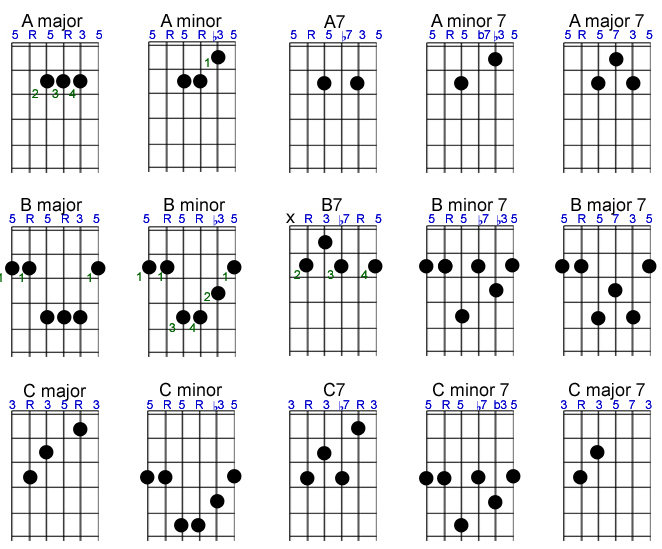 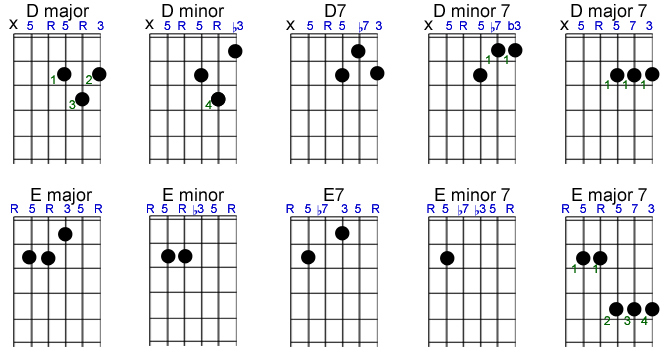 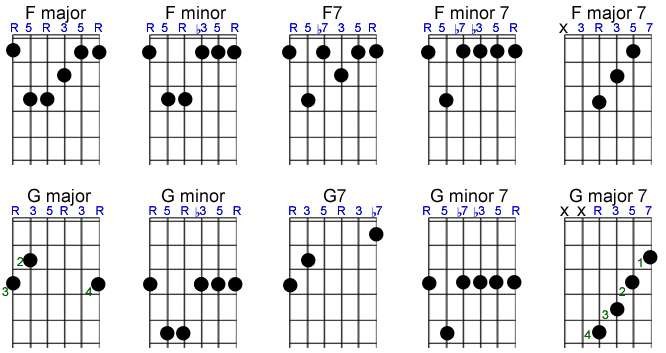 To save space, only chords on natural roots are included, but see below for information on moving shapes on the guitar fretboard to play sharp/flat versions of the chords.

Chords are combinations of specific notes, and as the guitar has many duplicated notes, there are many more fretboard shapes possible for each chord. The ones shown here are typical and common shapes.

The chart above shows additional information not usually included in chord diagrams. The numbers above each string show the intervals above the chord's root. See the chord construction chart if you're ready to learn more about chord formulas and want to try making your own chord shapes.

To make a sharp version of any chord shape, move the whole shape up the fretboard by exactly one fret. For example, if you move all notes of the chord shape shown for C minor up one fret, you get C sharp minor. If a chord shape includes open strings, they must be moved too (which often involves having to lay your first finger across the fretboard), or else they must be omitted. For example, look at C7, which is normally played as a 5 string chord, (the 6th usually being omitted as it's not a root note). The first string is also open E which would need to be moved up by one fret with all the other fretted notes if you wanted to make C sharp 7th. Unfortunately, that's impossible as (presumably) you've got no free fingers left - they're all fretting different notes. The first string, then, has to be left out. Fortunately, it's not an essential chord tone as the chord already contains the same note (an octave lower) on the 4th string, so it can be omitted without affecting the chord's harmonic effect. Alternatively, to find C sharp 7th, you can take another 7th chord shape, such as F7 and move it all the way up to start on fret 9.

To make a flat version of any chord shape, move the whole shape DOWN one fret. However, if the shape includes open strings, that shape can't be moved down any further. For example, if you slide B minor down one fret, you get B flat minor. If you slide it down one more fret, you get A minor, but the shape now includes open strings, so it can't be slid down any further. So how do you get to A flat minor (or G sharp minor, which is the same thing)? You can use G minor and move it UP one fret. You could also use C minor and move it up seven frets.

The principle of sliding chord shapes to obtain flat or sharp versions also applies to making alternative versions of the chords shown in the chart. For example, moving F major to begin on fret 3 instead of fret1 produces an alternative G major shape; moving it to the 5th fret produces an alternative A major, and so on. As the 6th string for this shape provides the chord's root, whichever note your first finger lands on will be the root of the new chord. Just remember that when shifting any chord shape, every note of a chord needs to be moved (including open strings) by exactly the same amount. If a particular note can't be moved then it mustn't be included (unless it also happens to be a chord tone).

For example, the chord shape given for C7 includes E on string 1. Moving the fretted notes up the fretboard fret by fret produces in turn the chords: C sharp 7 (D flat 7), D7, and D sharp 7 (E flat 7th). As you don't have a finger free to move the open E string along with the fretted notes, it can't be played because E is not a chord tone of any of those chords. On reaching fret 5, however, that open E is once again a chord tone. It's the root of the chord E7.

Most chords sound at their most balanced and stable when played in ROOT POSITION, meaning the lowest note has the same name as the chord. If the lowest note in the chord is not a ROOT note (i.e., a note that the chord is named after) then it's up to you whether to include that note or not as it will produce an INVERTED CHORD that may sound too unstable for your purposes. Inverted chords may sound less stable but can be more interesting in certain contexts and are important for voice leading (i.e., smoothly connecting tones of successive chords).