In the following examples and exercises, there's no need to play the chord shape shown by the notation. Any shape will do. Just read the chord symbols and choose fretboard shapes that you're comfortable with. There's no need to read the notation or tab; it's there just to show the rhythm. If you don't read music, just listen to the examples and follow the beat numbers shown below each measure as well as the pick direction - UP strokes (U) and DOWN strokes (D). When you can strum any pattern effortlessly, you can add subtle variations as explained below.

Here is a basic '4 to a bar' strum pattern consisting of four evenly spaced downstrokes per bar with each strum occurring on one of the four beats.

While that alone can provide a full harmonic accompaniment, rhythmically, it lacks interest. To make guitar strumming rhythmically interesting, we can add variety in several ways, such as:

1. Splitting the beats into sub beats and make different rhythmic patterns by strumming on specific beats and sub beats and missing out others. When you have a pattern you like, repeat it for every bar to establish it as a repeating strum pattern. Introduce temporary and subtle changes of pattern by missing out some beats or filling in missing beats to add variety and prevent it becoming boring and mechanical. Do it by feel. Keep changes subtle. Don't change the pattern radically unless you want a completely different rhythm.

2. Emphasising certain beats by strumming louder on those beats, especially by using downstrokes in contrast to lighter upstrokes that sound only the upper strings. We can also emphasise strums that occur between the beats (off beats) to give a syncopated effect.

In the following examples, you can see and hear how the beat is divided. By listening to the MIDI file, you can hear how each strum pattern sounds, at first on its own and then in a musical context. Listen out for subtle variations in accent as these contibute to the distinctive rhythmic feel of each of the patterns. In most patterns the strums that occur on the beats are downstrokes and the strums occurring between beats are usually lighter upstrokes that include just the upper three or four strings - but all variations are possible and provide a virtually infinite range of rhythmic strum patterns.

The example above is for four beats to the bar strum patterns, but it applies equally to all meters and time signatures, such as 3/4, 6/8, etc.

Notice how some rhythmic improvisation is obtained by occasionally missing out certain strums during the G and G7 chords. This can be done anywhere at will either by missing the strum and letting the previous strum ring out to fill the space or else by muting it altogether, for a slightly different rhythmic effect. This can enhance the strum's rhythmic variety and stop it being mechanical. If overdone, though, it can obscure the basic rhythm. Stay in control.

Here you can see that the quarter note beats (2 & 4) are split into eighth note sub beats with the second of each pair omitted, which causes the first of each pair to sound accented. They can all be played with downstrokes, or play beats 2 & 4 with upstrokes for a rhythmic feel that is closer to a reggae strum style. 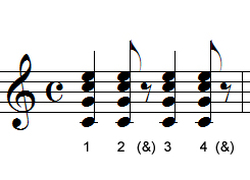 Here, every main beat is a bass note instead of a strum. The 1st and 3rd beats are bass notes played on the chord's root (C) while beats 2 and 4 are on the 5th of the chord (G). That provides the strongest bass arrangement, but depending on the chord that you happen to be holding, beats 2 and 4 can be any other chord tone within reach - even the same root note if necessary. 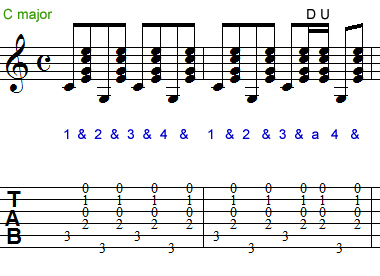 Starting every bar with a dotted quarter note strum, means the first beat will sustain halfway into beat 2 and gives a more rhythmically active feel. In bar 2 (E7), there's something of a syncopated (off beat) feel as the second half of beat 2 is tied to the first half of beat 3.

Every beat in this example is composed of an eighth note bass note followed by two 16th note (down and up stroke) strums. The example shows a barred C major chord in 3rd position, but you can play any chord. The bass notes should be chord tones, especially the root, for the main downstroke beats. In the example below, the initial bass note is the root, C, and the next lone bass note is the 5th of the chord, G. This provides a simple but solid repeating bass line to the strum pattern 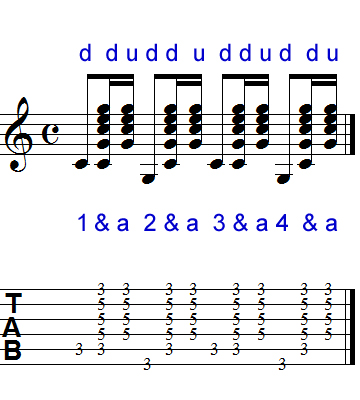 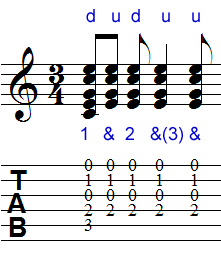 Note that if you put a stronger accent on the "&" after beat 2 by using a downstroke, each measure can be heard as two sets of three beats. The correct time signature would then be 6/8 ("six-eight").

The exact same effect can be achieved by using a simple time signature with triplets. Triplets are three notes of equal duration squeezed into the time normally taken by two notes of that same notated duration (e.g., three eighth notes played in the time of two eighth notes). In 4/4 time, each quarter note beat could be composed of three triplet eighth notes instead of two normal eighth notes.