The list below contains the formulas for chord types in relation to the major scale. It's important to note that the chords don't necessarily derive from the major scale in a musical sense. It's just that the major scale is a convenient and universally accepted yardstick against which the notes of any chord type can be named. 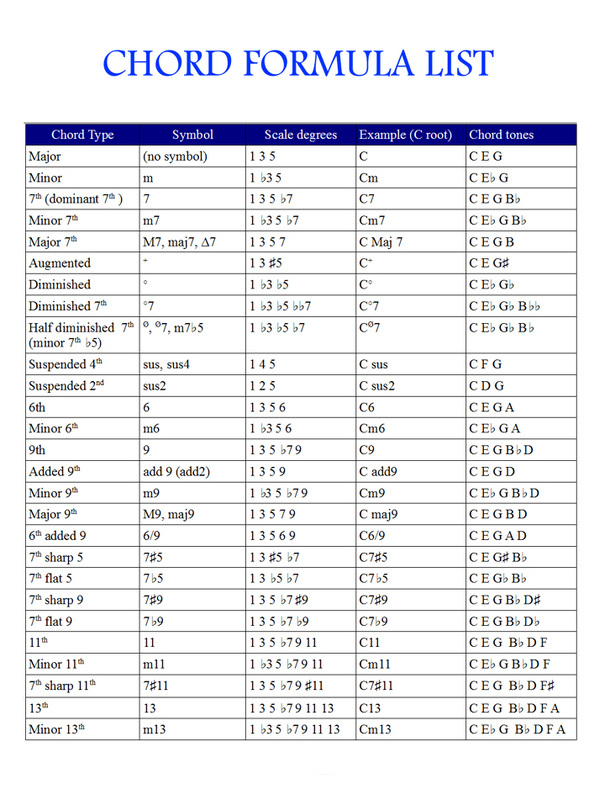 To make any chords other than C chords, just use whichever major scale corresponds with the root of the chord. So, to know the notes of G major 7th, for example, use its formula (1 3 5 7) but with the G major scale instead of C major.

Duplicate Notes
Any notes of a chord can be doubled at any pitch without changing the chord's quality. For example, the first chord in the list is C major with chord tones C, E & G, but we can have as many C, E & G notes as we like - or as many as our instrument (or our fingers) can handle and the chord will still be C major. A guitar can manage six notes at most as it only has six strings, but an orchestra playing a C major chord can have dozens of duplicated notes with some instruments playing the note C and others playing E and G notes.

Leaving out non-essential chord tones
It's common practice when playing chords to omit notes that aren't considered essential, especially on guitar, which is limited to a maximum of six notes. Major 13th chords, for example, include the 11th scale note in theory but rarely include it in practice. Not only is it not essential in defining the harmony of a 13th chord, it causes a strong clash with the 3rd of the chord that most people want to avoid (the so-called avoid note in jazz). 9ths can also be omitted from 13th chords without weakening their harmonic effect. 5ths (provided they're not diminished or augmented 5ths) are very inactive chord tones and can easily be left out of most chords without weakening their harmonic effect in any way. The common C7 chord shape at the nut is an example of a 7th chord with the 5th (G) missing, but it's no less effective as a dominant 7th chord than other shapes that do contain the 5th.

Root Position and Inversions
In practice, the notes of a chord can be arranged in any order on the fretboard, and, as mentioned, the notes can be doubled at any octave, and it will still be that chord. However, the choice of bass note can make a significant difference to the sound of a chord. If the bass note is also the root of the chord, (e.g., the note G in any G chord) then the chord is said to be in root position and will be at its most balanced and stable. Root position is by far the most common arrangement. If the lowest note of the chord is NOT the root, then the chord is said to be inverted.