Like major and minor scales, each mode has a unique interval arrangement based around a musical 'centre'. In original Western modal music from Medieval to Renaissance periods, this note was called the final (finalus). Now that the modal system has long been superceded by a tonal or key-based system, we call that note the tonic, and in music it functions as the tonal centre, exactly as in major or minor keys and scales. Each interval arrangement imparts a subtly different flavour or character to music composed in that mode, and we can see how by comparing them to familiar major and minor scales.

There are two common ways to view modes for comparison purposes: as diatonic rotations of each other and in parallel.

This view shows all the modes that can be formed from the same diatonic note-set, which in this example is the natural diatonic note set: ABCDEFG. They all have exactly this set of notes but a different tonic. which is also the first note of the mode when written out as a scale. As most musicians know their major scales, they can use it to know which notes each mode contains.

To be able to name the notes of any mode, all that's needed is to learn the order of them as shown in the 'modestar' below. As you can see, all of the modes contain the same notes as each other, and because we're using the natural diatonic note set with no sharps or flats for this example, they're also the same notes as the C major scale. 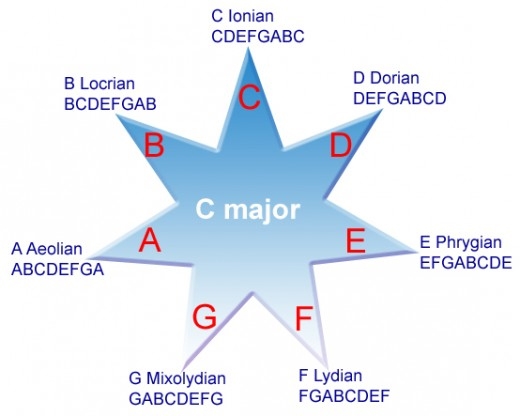 To find the notes of any modes based on other diatonic note sets, such as F Mixolydian, Bb Phrygian, etc., you can do the following: (It's assumed that you already know major scales pretty well, if you're now studying modes.)

For example, let's say you wanted to know the notes of E Dorian. You already know, from having memorised the order of the modes above, that the Dorian mode is mode 2 (going clockwise round the star from the top). From knowing your major scales, you also know which major scale has E as its second note, i.e., D major. So, E Dorian must contain the same notes as the D major scale but starting from the second note (E).

Another example using a different diatonic note set.
The Phrygian mode is the third mode along from the Ionian/ Major so the question you need to ask yourself is: "Of which major scale is G the 3rd note?". The answer is E flat major. So, G phrygian must have the same notes as E flat major but starting on the 3rd note, G. (G Ab Bb C D Eb F G)

One more?
Lydian is four modes along from Ionian/major, so ask yourself the question:

Of which major scale is B flat the 4th note? The answer is F major, so it means that Bb Lydian must contain the same notes as F major but starting from Bb (Bb C D E F G A Bb).

That's the rotational way of finding the notes of any mode. The following parallel way is easier and more informative.

Although viewing the modes rotationally as shown above lets you see which notes a mode contains, it makes it difficult to see how they differ from each other or how music in modes differs in flavour from familiar major and minor key-based music. By transposing all the modes to begin on the same note (A in this example), you can see how each mode differs from the others. You can also see under each note, which chords could be constructed (if required) from the notes of the mode. In modal music, most of the chords shown wouldn't actually be used; modal music tends to be harmonically simple. 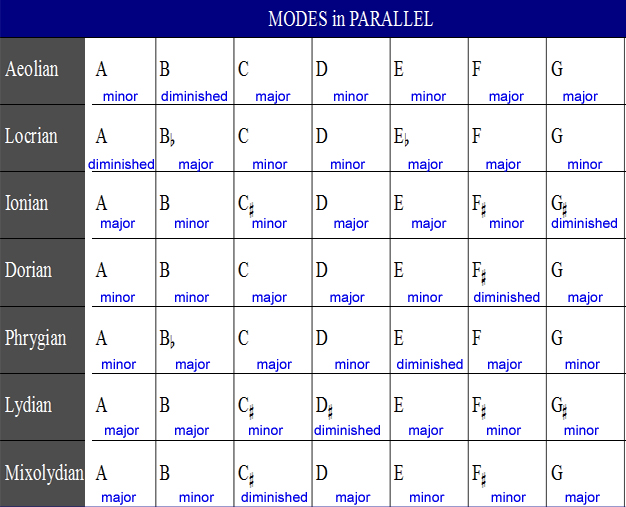 As most musicians are familiar with the musical character of major and minor keys, each mode can be seen in relation to the major or minor key beginning on the same note.

The Aeolian mode is identical to the natural minor scale. Minor key music, traditionally, features the raised 7th scale degree, (G# instead of G in the key of A minor), but in rock music, there's a tendency to avoid this common practice on the grounds that it sounds too 'straight' and 'classical-sounding' so the label 'Aeolian' is often applied to minor key music that avoids the raised 7th scale note.

The Locrian mode is similar to the minor scale but has a flat 2nd and flat 5th. This mode is useless for most purposes due to its tonic chord containing a diminished 5th interval (A - E flat instead of A - E), which prevents it from functioning as a stable tonal centre. It has some limited use in jazz, and has turned up in a few modern classical works but is mostly used as a special effect. It is the most recent addition to the modal system but was (and mostly still is) considered to be of theoretical, rather than practical, interest.

The Ionian mode is identical to, and has been replaced by, the major scale. The Ionian mode, wasn't admitted to the modal system until the mid 16th century, almost a thousand years later than the Church modes. It was commonly used, albeit unnamed, in popular music of the Renaissance period. The Swiss theorist Glareanus included it in an important theory publication called Dodecachordon (1547), which provided a complete revision of the existing modal system and named it 'Ionian' in similar Greek style to the others. The Aeolian mode was also introduced and named in the same publication.

The Dorian mode is the same as the natural minor scale but with a raised 6th note (F sharp instead of F). It's very common in folk music of the British Isles, Scarborough Fair being a typical example. A common Dorian vamp (short repeating chord sequence) for improvising over comprises the chords Am7 - D7. Examples in rock include: Oye Como Va (Santana) and The great Gig in the Sky (Pink Floyd).

The Phrygian mode is the same as the natural minor scale but has a very distinctive flat 2nd degree (A Phrygian has B flat instead of B), which gives it something of a Spanish/ flamenco or Eastern sound.

The Lydian mode, in modern terms, is the same as the major scale but with a raised 4th note (A Lydian has D# instead of D). It was very popular in the Medieval and Renaissance periods and is important in jazz, especially following George Russel's 1953 book: Lydian Chromatic Concept of Tonal Organization, which influenced artists such as Miles Davies and John Coltrane.

The Mixolydian mode is the same as the major scale but has a flat 7th. (A Mixolydian has G instead of G sharp). Like the Dorian mode, it's very common in folk music and even more common than the Dorian mode in rock music. It was more commonly used in pop and rock during the sixties, and Mixolydian (or Mixolydian influenced) examples from that period include: Sympathy for the Devil (Rolling Stones), Norwegian Wood (Beatles), If I Were a Carpenter (Tim Hardin) and I'm So Glad (Cream).

The first four of the seven modes (Dorian, Phrygian, Lydian and Mixolydian) were formulated in the early middle ages by European monks tasked with classifying the existing body of religious plainchant (Gregorian chant) and other sacred music. Guided by a Latin translation of a Greek music theory text, the monks attempted to recreate the scale system used in ancient Greece. Misunderstandings of the system led to them using the same names used by the Greeks (Dorian, Phrygian, etc.) but misapplying them. The modes that we call Dorian, Phrygian etc. are not the same as the Greek Dorian and Phrygian 'scales'. Apparently, their biggest mistake was in not realising that the ancient Greeks numbered their scale notes in descending, rather than ascending, order

The Meaning of "MODE"
The word mode comes from Latin and means manner, method, way and refers to how the scales were used to classify existing Church music and to compose music following various Church-approved guidelines. Melodies had to stay within a certain range (ambitus) and approach the last note (called the final) by a fall from a specified higher note (depending on the mode). The word scale (scala - steps, stairs), by contrast, refers to the notes arranged in pitch order.

Plagal Modes
Plagal modes were an accompanying set of modes (now obsolete) that were down-shifted versions of the authentic modes and prefixed with the the word 'hypo' (under, below). D Hypodorian, for example, had the same notes as D Dorian (DEFGABCD) but started on the A below to the A above (ABCDEFGA). The final, and principal, note of the D Hypodorian mode, was still D as with the D Dorian mode. It looks like the A Aeolian mode, but it's not the same as the A Aeolian mode, which has A as its final. The purpose of the plagal modes was to extend the vocal range downwards, or rather, to identify melodies that descended below the final. If a Dorian mode plainchant melody, for example, never descended below the final, the mode was authentic, if it descended below the final, it was plagal and called 'Hypodorian'.

The Decline of the Modal System
The modal system of music composition reigned supreme in Western music for over a thousand years until it fell into decline in the 17th century and evolved into the modern major-minor key system. Classical composers mostly abandoned modal music in favour of the new system of major and minor key-based music that was starting to appear, but they sometimes revived the modes for various musical effects.

Revival of the Modes
Folk music, which retained some modal elements, and modal jazz, which adopted them in the late fifties, caused their revival to an extent, and saw two of them (Dorian and Mixolydian) commonly used in rock music, especially folk-influenced rock music of the late 60s and early 70s. This modern usage treats the modes simply as unique scalar note sources based around a tonic note. There are none of the conditions or restrictions that applied in the Medieval or Renaissance periods, such as having to stay within a certain pitch range or having to fall to the final from a defined note above. A musician of those periods might disagree that these scales as they are presently used are modes at all as the conditions and restrictions attached to them then were an essential part of the mode. That's what made them modes: the way they were used; not just the notes themselves. For more information on their original use see ﻿medieval.org