Here are the names of all the notes on the guitar fretboard up to the 12th fret in standard tuning plus the most prominent (and usable) natural harmonics locations. All notes fretted above the 12th fret are an octave higher than the corresponding note located 12 frets lower on the same string so have the same names.

Non-natural notes can be named either by their sharp name or flat name, e.g., C sharp or D flat, provided there's no musical context involved. If there's a musical context, the note will be named depending on factors such as the key of the music. 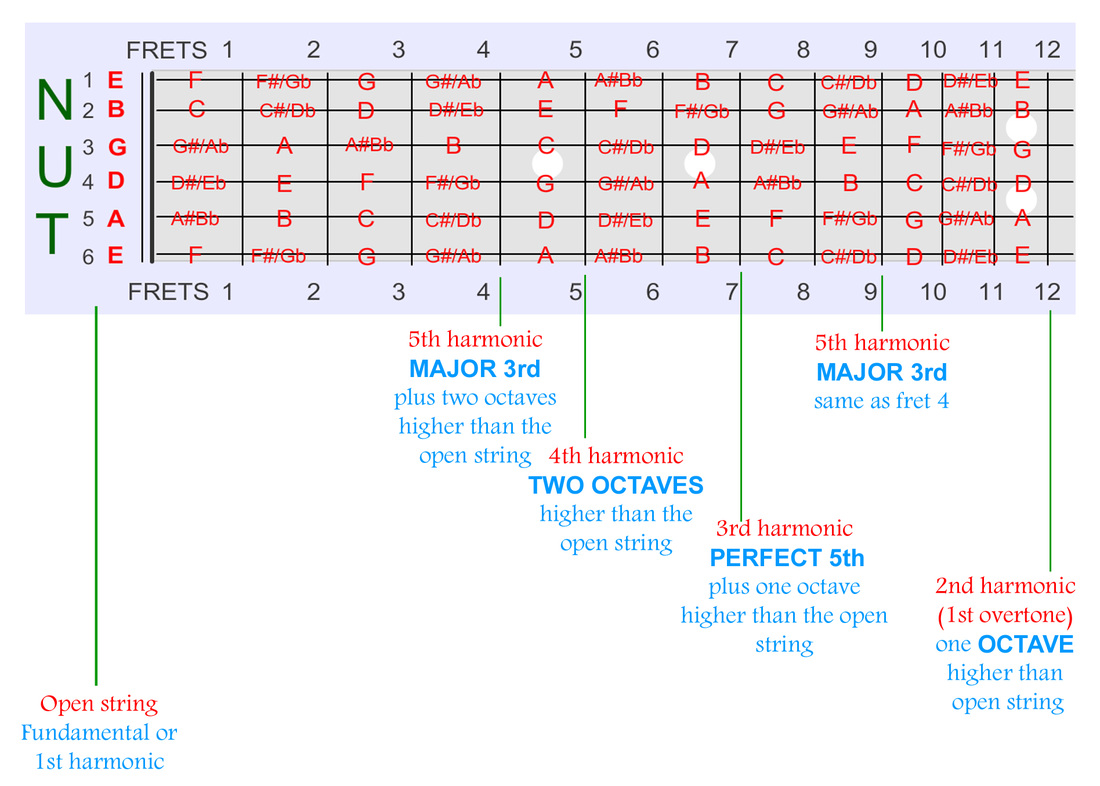 If you're unfamiliar with playing natural harmonics on the guitar, they're produced by lightly touching any guitar string with your fretting-hand finger tip over the specified fret. Don't press down - just touch it lightly. Then pluck the string (with any picking-hand finger) and immediately release your fretting-hand finger from the string and the harmonic will ring out with its distinctive tone. Don't place your finger just behind the fret like you do when fretting a note. Your finger must be touching the string exactly above the fret metal. Don't be too slow in removing your finger or it will mute the harmonic and prevent it from ringing out clearly. Don't be too quick either or all you'll hear is the open string ringing out. Bass strings at the 12th & 7th frets are the easiest to work with and practise on.

Natural harmonics occur at exact divisions (nodes) of the length of the vibrating string. Those that are useful to guitarists (easy to produce and tuneful) are those that occur at:


Each division produces an audible harmonic which is a multiple of the fundamental frequency (vibration rate) of the open string. That means every open string has its own set of harmonics, but they all share the same fret locations regardless of string and also regardless of tuning. An altered guitar tuning such as DADGAD will have its unique set of harmonics occurring above exactly the same frets as in standard (or any) tuning.

For example, string 5 in standard tuning is A and has a frequency of 110 Hz (110 vibrations per second).

The harmonic produced at fret 12 on that string has a frequency of twice that, or 220 Hz, so we hear it as the A one octave higher in pitch. It has the same pitch as the fretted note at fret 12 or string 3 fret 2.

The harmonic produced at fret 7 has a frequency that is three times higher (330 Hz) and we hear that as E - a perfect 5th plus an octave higher than the open 5th string.

The identical harmonics produced at frets 4 and 9 have a frequency that is five times as high as the open string, i.e., 550 Hz - which is the note C sharp - the same pitch as the fretted note on string 1 fret 9.

Other harmonics can be found closer elsewhere on the string, but they aren't so easily produced as they don't line up as closely with the frets as the ones above. Nor are they very accurate or loud. Acoustic guitarists don't have much use for those, but with an electric guitar, plus the help of amplification and electronic processing such as distortion  or multi-effects foot-pedals, etc., can achieve impressive musical sounds when playing those more obscure harmonics.

In physics, the fundamental pitch (the open string in the case of guitar's natural harmonics) is called the first harmonic. For many guitarists, however, the first harmonic is the lowest pitched one that can be produced as a sweet-sounding harmonic on the guitar i.e., the 12th fret harmonic. The numbers aren't important, but it's very useful to memorise the intervals that each produces with the open string. Regardless of string or tuning, the intervals never change.

Harmonics above the first harmonic or fundamental are also referred to as overtones. So the 1st overtone corresponds with the 2nd harmonic, the 2nd overtone with the 3rd harmonic, and so on.

Guitars, and most other modern Western Instruments, follow the tuning standard known as equal temperament. In equal temperament, semitones are defined as being exactly one twelfth of an octave, which (as before) is defined as a 2:1 pitch relationship.

Guitar frets are laid on the fretboard according to this system, which is why the octave above any open string is exactly twelve frets higher. What it also means is that, apart from the octave, all harmonics will sound very slightly different in pitch from the equivalent fretted notes. The harmonics haven't changed, of course, but the fret placements have. Laying the frets so that each fret (or semitone) is exactly one twelfth of an octave higher than its neighbour means that most of the fretted notes will be slightly different from the harmonic at that fret. Only the octave (12th fret) note will exactly agree with the harmonic.

For example, the harmonic produced on fret 4 of the 6th string (G#) will sound slightly different from the G# fretted note on string 1 fret 4. The exact locations of the harmonics (again, apart from the 12th fret) will also differ very slightly from the fret placement. For the important harmonics mentioned above, the difference in pitch goes unnoticed by most people including professionals, and as the difference in location is smaller than the width of a fingertip, it can be ignored for most playing purposes.