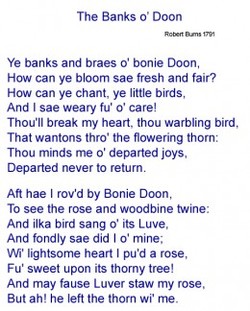 In this arrangement of Ye Banks and Braes, more correctly, but less commonly,  known as 'The Banks o' Doon', the key is C major and most of the arrangement is played in the first position of the fretboard. The highest fret that you have to reach up to is A on fret 5 of string 1. That's easy enough in bars 17 and 19 as you just have to stretch up with your 4th finger to reach it. Bar 23 is a different matter, however. The note, A is a chord tone of F major played in the 3rd position of the fretboard. It's the most difficult part of the song. If you can't manage it, then you can omit the two inner notes of the chord. The F note on string 4, fret 3, and the high A on string 1, fret 5, are essential notes, so if you can at least get those two, you can still get the necessary bass and melody notes. The A note is the important major 3rd of the chord, so you'll still have the correct harmony.

Ornaments are any short decorative notes that can enhance the melody provided they're not used too much. You can see an example of one included in the score included in the score at bar 21. It's a very brief pull-off 'grace' note (called an acciaccatura in music theory). Folk guitar arrangements are very flexible regarding ornaments and you can put them in wherever you like, and even change them each time you play the song, but as mentioned, don't overdo it. The same applies to slurs played as hammer-ons in a few places.

Another improvisation feature often employed in melodies that are originally vocal is the use of ties from the last melody note of some bars to the first note of the following bar. This has the effect of anticipating the melody note before the beat and producing a lilting effect. It's a common vocal effect that isn't usually shown in scores. Singers often do it without being told, so this is just a way of adding vocal effects to an instrumental melody. You can see where I've added them in bars 1-2, 9-10 and 25-26. As with ornaments, you can choose where to do it. Alternatively, you can ignore those ties and allow the last note to ring out for its full duration, and then play the next note on the first beat of the following bar. It's a matter of musical taste, so it's up to you.